The past decades have shown a significant increase in aquaculture operations, which has put increasing pressure on the industry’s supply chain.

Biodiversity and Aquaculture: Is There Tension Between Food Security and Marine Environments?

As food demands have increased globally, aquaculture—the cultivation of fish and other marine life—has emerged as the fastest-growing form of food production. While the history of aquaculture dates back thousands of years, technological advancements in various relevant fields have seen the industry develop significantly over the past two decades.

Aquaculture may offer a more sustainable alternative to traditional capture fishing, consistent with the UN Sustainable Development Goal 14 (SDG 14) aim of reducing overfishing. Production statistics from the Food and Agriculture Organization of the United Nations (FAO) underline aquaculture’s potential: in the 1990s, aquaculture production amounted to 21.8 million tons (MT) and reached 87.5 MT by 2020, an increase of over 300%. In contrast, capture fisheries recorded an increase of only 1.5% during this period, reaching 90.3 MT.

The growth of aquaculture comes with its own sustainability concerns, however. The United States, for example, which is one of the major consumers of marine products worldwide and is highly dependent on imports, has moved to expand its fish production. In May 2020, then-US President Donald Trump issued an executive order which included broad changes to US regulations on fish farming, including measures to develop aquaculture in deep federal waters. US aquaculture operations had previously taken place along shorelines or were land-based operations.

Organizations such as the Center for Food Safety (CFS) and the Wild Fish Conservancy have voiced their opposition to such deep-water aquaculture plans due to the threat aquaculture poses to marine ecosystems. In June 2022, CFS published a letter of intent to sue the U.S. Army Corp of Engineers over the decision to issue nationwide permits intended for finfish aquaculture facilities. The letter broadly alleges the withholding or lack of assessment of deep-water aquaculture’s environmental impacts compared to its potential economic benefits.

According to the FAO, 652 reported “species items” are being farmed. These include 492 individual species, such as finfish (313), mollusks (88), and crustaceans (49), as well as algae and other animal species such as frogs and aquatic turtles.

The two main types of aquaculture are marine and freshwater. Marine aquaculture refers to farming species that live in oceans and estuaries, while freshwater or inland aquaculture takes place in inland water sources such as ponds or other human-made systems. In the aquaculture industry, the use of cage and pen cultures is highly dependent on the country of operation and the national and local policies governing public open waterbodies. Inland aquaculture accounts for around 44% of the world’s total aquaculture production while 56% is derived from marine or coastal aquaculture.

Some of the most familiar impacts of aquaculture on biodiversity are associated with the controls that production companies use to prevent predation from local species such as marine mammals (including seals and otters) and bird life. An emerging issue for the aquaculture industry is that of animal welfare. As is the case with many other animal species, research is increasingly finding evidence of more emotion and complexity in the lives of aquatic species than had previously been considered. Investors interested in the topic of animal welfare would do well to be prepared for the future extension of this topic to the aquaculture industry.

In the following sections we consider some of the indirect biodiversity impacts that can be less obvious to consumers and also harder to regulate.

A significant driver of biodiversity loss, in addition to overexploitation, habitat loss, and degradation, is the introduction of non-native species. Like agricultural practices such as soy and corn farming, most aquaculture operations form monocultural ecosystems and rely heavily on the farming of non-native aquatic species. According to the FAO, the Atlantic salmon makes up around 32% of worldwide marine and coastal aquaculture, while Whiteleg shrimp (51.7%) and Red swamp crawfish (22%) dominate the cultured crustaceans industry.

These species are often cultivated due to their suitability for such environments. They are deemed either more resistant to diseases and other influences or more economically viable sources of food. Introducing non-native species into ecosystems could pose various threats, however. In the past, species introduced through aquaculture activities have managed to escape, colonize various ecosystems, and outcompete native species for resources and habitat, thereby altering ecosystem dynamics and potentially leading to species extinctions. According to the British Ecological Society, more than 68 non-native species in China have successfully established populations in natural habitats as a result of recurrent leakages or escapes.

Recent technological advancements in the field of genetic engineering have raised further concerns over invasive or non-native species. According to the CFS, several farmed fish species are being genetically altered to increase growth, disease resistance, muscles, or temperature tolerance. While this technique is still in its early stages, various species have been the subject of relevant research, including trout, catfish, tilapia, and salmon.

In 2015, the FDA approved the commercialization of the genetically engineered AquAdvantage Salmon. The approval, despite the salmon’s use being confined to specific land-based facilities, has garnered opposition from scientists, consumers, and those involved in fishing and other businesses. The impacts and possible consequences of genetically engineered fish entering natural ecosystems have been only partially explored and are being debated.

Increasing demand for and production of fish feed have also increased pressures on the aquaculture supply chain. The sector relies predominantly on feed produced from fish meal and fish oil (FMFO), which contains fatty acids and micronutrients. So-called forage fish, of which around 19 MT are caught in the wild yearly, are ground into a meal to produce the FMFO.

The expansion of aquaculture, as well as the establishment of larger and more intensified aquaculture operations, is expected to substantially increase the demand for FMFO. Environmental groups warn this situation could lead to consumption surpassing the ecological supply of forage fish. For naturally occurring marine populations, this would cause food shortages and subsequently threaten the balance of ecosystems. In 2018, FAO reported that 33% of the world’s fisheries are overfished.

Nutrient pollution has been a particular issue for intensive marine farming operations. Uneaten feed is lost to surrounding water and sediment, which increases the amount of nitrogen and phosphorus in the water. Other waste such as feces can also be released into the local ecosystem. These deposits can alter the chemical and biochemical make up of their surroundings, impacting the balances of these environments.

Aquaculture operations that are not isolated from their natural surroundings require inputs to maintain a healthy habitat for the organisms being raised as well as to combat parasites and diseases that are major threats to monocultures. Antibiotics are often required to combat bacterial, viral, and fungal diseases, as well as parasites that can spread easily in environments with high fish density, especially those in which genetic diversity is limited. These diseases have the potential to spread to the naturally occurring species surrounding the aquaculture operations.

Aquaculture inputs include various chemicals required  to control outbreaks of pests as well as those used for the maintenance of operations: for example, anti-fouling agents used to avoid the clogging of meshes in cages and nets. The effectiveness of chemicals in high-density environments reduces the required amount. Other inputs include pesticides and parasiticides. These inputs can contaminate the surrounding marine fauna and seabed, which act as food sources for naturally occurring marine populations.

ISS ESG’s Norm-Based Research has identified 25 publicly held issuers involved in aquaculture-related controversies, which primarily occur in the food retail and agricultural commodities industry, with most cases potentially being severe. The allegations include failure to prevent water pollution related to salmon farming in the United Kingdom; illegal waste disposal and overproduction at companies’ operations potentially impacting protected areas in Chile; and salmon waste dumping and the increased use of antibiotics in aquaculture operations affecting waterways in Australia.

Some issuers are also alleged to have failed to prevent depletion of biodiversity due to alleged unsustainable aquaculture practices involving supermarkets and processors in the seafood supply chain in several countries such as India, Vietnam, Mauritania, and Morocco. In a 2019 report, the NGO Changing Markets Foundation criticized companies’ involvement in the production of FMFO: since FMFO is produced by capturing small fish in the wild, it may contribute to the collapse of fish stocks.

Processing and Food Circularity in the Aquaculture Supply Chain

ISS ESG Corporate Rating research assesses relevant companies based on their measures to promote sustainable aquaculture. These measures comprise a list of qualitative and quantitative parameters that can help reduce the problems caused by unsustainable aquaculture practices. They are also reflected in various international certifications and standards, including the AquaGAP standard for Good Aquaculture practices; the Aquaculture Stewardship Council certification (which is species specific); Global Gap: Aquaculture Scope; and the Naturland standards for organic aquaculture. A company’s performance can also be assessed by the scope of its operations that are certified according to these various standards.

Aquaculture Sustainability is particularly relevant to three industries from the Corporate Rating universe: food products, restaurants, and retail. However, not all companies from these industries carry risks related to aquaculture as it is not a part of their business model. The following figure captures data only for the ones that do.

Figure 1: Relevant Companies’ Performance on Measures to Promote Sustainable Aquaculture along the Value Chain, by Industry

As is evident from the figure above, the retail industry has the most companies for which Sustainable Aquaculture is judged to be an issue. While on the one hand the topic may seem less directly relevant to retailers, on the other the sector has a responsibility to ensure sustainable sourcing along its value chain, and its poor performance in this regard is represented here. The largest result category for each of the three industries is a D-, implying that there is a general problem across sectors regarding disclosure on the topic of Sustainable Aquaculture.

Although aquaculture can contribute to global food security, sustainable production and waste management remain major challenges. Solutions exist: for example, bones and shells from processed seafood can be used in packaging material; and black soldier flies, which are used as a protein ingredient in aquafeed, can be cultured via “fish sludge” (feces and uneaten feed). Regulations and certifications need to catch up, however, to improve sustainability and circularity in our aquatic food production systems.

The significance of aquaculture as a food source as well as its economic importance to livelihoods and employment cannot be disregarded. The past decades have shown a significant increase in aquaculture operations, which has put increasing pressure on the industry’s supply chain. Increasing industrialization in the sector has translated into intensification of operations, which in turn requires more inputs for remedies for pests and parasites as well as increasing inputs of chemicals for maintenance purposes.

The emergence of aquaculture operations in already stressed ecosystems may have detrimental effects. Improved monitoring and more secure and sustainable operations, such as aquaculture in isolated ponds, may help to meet rising global demands for protein at the same time as mitigate the environmental impacts of increasing demands and operations. One approach can be deploying circular economy strategies within the sector.

Increasing aquaculture-specific regulations and certification are helping pave the way to more sustainable aquaculture, but it is important that regulation is supported by adequate oversight and enforcement mechanisms. Improvements such as alternative feed and better waste management systems are being developed to deploy more environmentally friendly practices in the sector. Investing in more sustainable aquaculture practices and supply chains will also support the demand for the industry’s products, as the world’s consumers increase their appetite for sustainable food products. 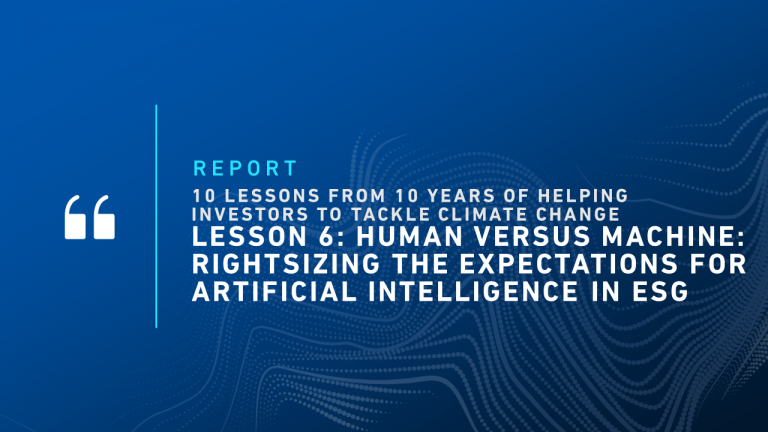 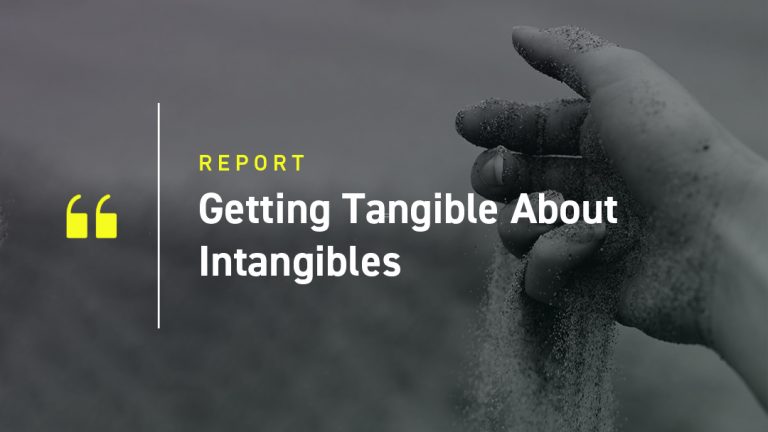 Getting Tangible About Intangibles

July 8, 2020
Get WEEKLY email ALERTS ON THE LATEST ISS INSIGHTS.